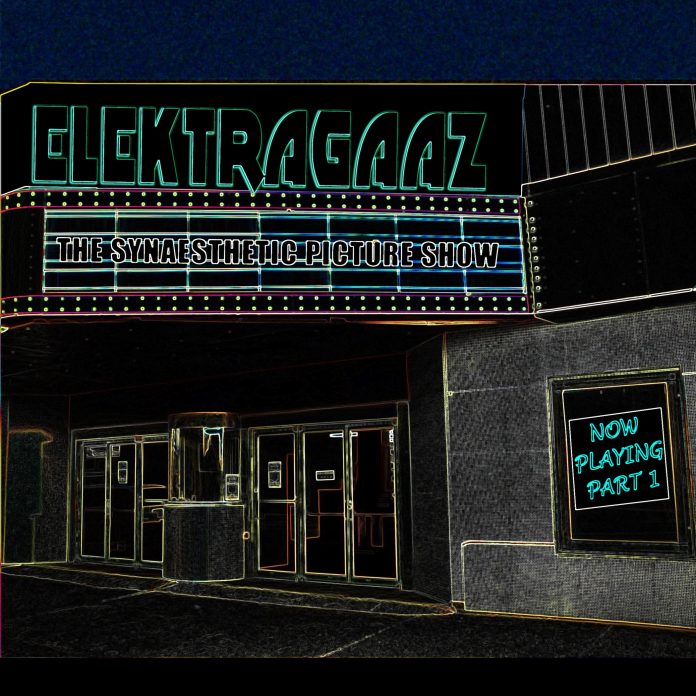 Elektragaaz are a global live and virtual instrumental group featuring a mix of live and electronic music with most of the members based in the New York metropolitan area but headed by a mysterious and intensely private Frisian composer using the pseudonym of Poppo Redband but usually referred to as simply Redband. The group exists in both the real world and in a fictional universe, a volatile blend that can be bewitching or bewildering or both. The music too may leave listeners both bewildered and bewitched, drawing on such far flung influences as classical music, hip hop, rock, club, techno, pop, dance, film noir, comic books and video games– all precipitated by Redband’s neurological condition which causes him to see music as well as hear it.

The Elektragaaz project all began with a mysterious phone call to Lloyd on a late spring evening in 2017. Lloyd, in his Manhattan apartment, was idly surfing the web when his iPhone buzzed. After he responded with a “hello,” there was a long pause Then a young voice spoke, in clear English with a smidgeon of an accent: “Hello, I see some music that needs listening”. Lloyd smiled at the odd turn of phrase and asked “OK, and who are you?”. Another long pause. “I don’t use my real name. I go by Poppo Redband but just Redband mostly.” Lloyd gleaned little information on that night or subsequently as to the identity of “Redband”, though in the course of the conversation it appeared that Redband is a fledgling video games developer as well as a composer, purportedly based in Friesland, a province of the Netherlands,. Redband told Lloyd he was working on a musical project that he styled Elektragaaz and wanted to gather collaborators and a producer for what he called his musical “quest”. Following the conversation Redband began to send Lloyd intriguing electronic tracks via WeTranfer, Dropbox and Google Drive, the material originating from an ever changing array of email addresses. Lloyd pulled in the most talented folk available in the New York area for the purposes of the Elektragaaz collaboration, eventually recording a deep and wildly varied collection of instrumental music, a small slice of which will be included in the debut EP.

Thus the the Elektragaaz saga began but it is far from over and continues, with a variety of twists and turns including, for example, the introduction of the characters Tom Elektron, Mat Thunder, Kathy Kaos, Jas Windstorm, Kosmik Kate, Josh Firebow and Steel Mike. And exactly who is Redband? The only image that purports to be him is carefully doctored to hide more than it reveals. But that’s another story for another time.

From the opening single, Dancing with the Queen of Hearts begin this work with a synthesizer augmented splash of a dizzying alternative  sound.  The Magic Knapsack introduces listeners to their typical edgier approach. Seldom are Elektragaaz tempted to indulge in wall-to-wall guitar heroics, so their harder edged tracks are invariably tempered with light and shade. Cabin Fever  is a sharply written, gleaming shot of electronica further fleshed out by a perfectly deployed smattering sound. It’s a tense, tightly wound song suggestive of an animal poising to strike and delivers some memorable high points and climaxes along the way. She Walks It Like She Talks It  is one of the album’s closest moment to an all-out aural assault on the listener and comes rampaging from the speakers embodying the seize the day urgency of its title.

Phil Gumm’s Progress turns desperation into an anthem about survival. It’s a perfect conclusion for the album and, while Elektragaaz  may not yet be packing larger stadiums across multiple continents, it illuminates for a final time the band’s clear ambition. This is a towering lunge towards the heavens and the band’s powers of communication help push their musical and performing talents into even bigger possibilities. The sky is indeed the limit with Elektragaaz and their debut effort.