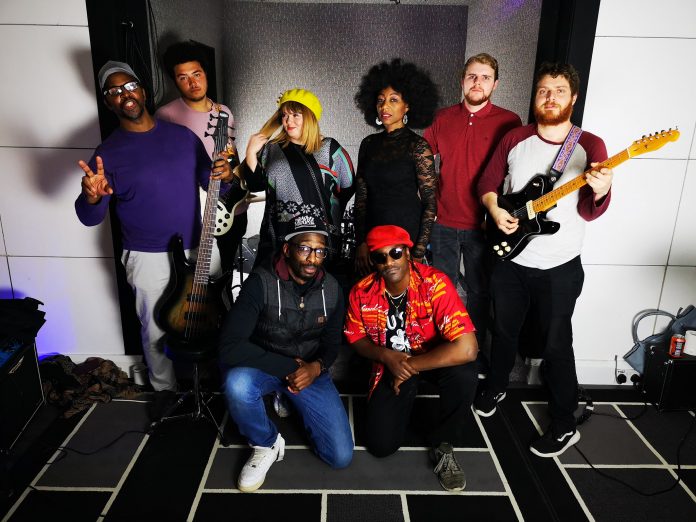 NGUVU: A Swahili term for Power, Force, and Energy. Perfect words to describe this musical powerhouse. Formed in Manchester by drummer Jamal Lewis-Service, NGUVU provide the UK with powerful music so raw it will hit your core. NGUVU includes a wealth of artists of all styles, with a shared love for grooves and pushing boundaries, Combining a blend of Funk, Soul, Hip-Hop, Afro-beats, Jazz, and others. A must see band in the future.

What inspired you to get into music?
My family has been musicians for generations. My parents met through their old band, and my cousin was one half of Sweet Female Attitude in the 90s. As for my own journey, I got into music ever since I was a teenager and got into drumming when an actor friend did a drum solo during a theatre show I was a part of. NGUVU was formed as a part of my final Uni exam, in which I had to write a full set of songs and perform them live, and we developed our sound from there, and we’re still going strong despite the current climate.

How would you describe your music?
I’d describe it as powerful, engaging and eclectic mashup of music with with a heavy emphasis on groove and feel. Genre wise, we mostly dabble in mixing Jazz-Fusion, Funk, Soul, and Hip-Hop, though we’re not afraid to Rock out and get heavy at times.

What would you say is your recording and song writing style?
My creative style usually consists of social commentary on issues and themes I want to express, but I use the Bruce Lee philosophy for the creative process. I’ll take a different and unique spin on given topics, emotions or genres. For example, we have tunes based on an honour killing of a friend and on the other hand we have a tongue in-cheek commentary about stalking, either way, it’s about telling stories behind hypnotic grooves.

Where would you like to see your music career in 5 years time?
We’ve always been a “Longevity over fame” band, thus we’ll be consistently growing, evolving, and making some great collab projects with some top artists, whether emerging, or established.
Also Touring around the world is a definite, and I can see us developing a strong following in places such as the Caribbean, Africa, Japan and the US, plus I can see multimedia projects such as TV, Film and Theatre projects.

Where can music fans listen your music?
Hit up NGUVU on Spotify, and Bandcamp
(https://nguvumanchester.bandcamp.com/album/julie-2) where you can check out our debut EP “Julie”. And follow @nguvuband on Instagram.