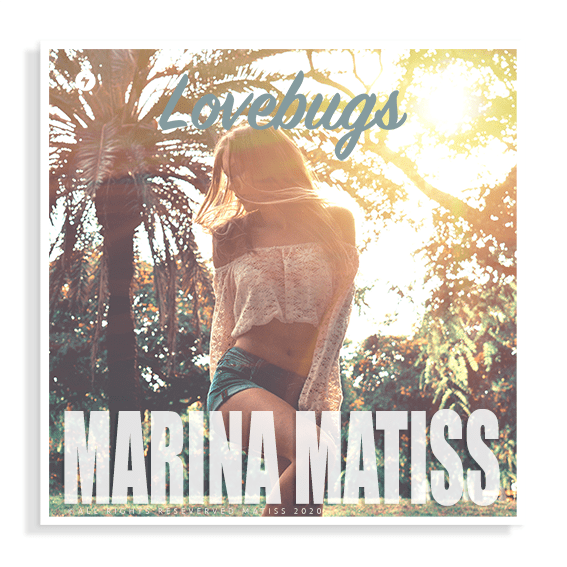 Introducing Marina Matiss, a Barcelona based multilingual singer and songwriter. She started singing and playing the piano at a young age and released debut single “Phoboslight” in 2020. Matiss speaks fluent Spanish, German, English, Russian and Polish but mostly makes her music in English. Her new single “Lovebugs”.

Throwing things back a bit to 90s girl pop, and mixing in dark, mysterious emotions Marina’s track “Lovebugs” is an amazing track which is certainly picking  up steam.

Unlike fellow peers Lana Del Rey, Billie Eilish or even Ariane Grande, I think Marina’s essence is generally less dance pop and more ‘thinking outside the box’ . The subject in the track longs for something and that control of having to see this other person on their terms, and that’s not the case. Is “Lovebugs” about a certain someone?  Hard to say, but my mind wandered into some bizarre territories while listening to the track. I always appreciate artists that give their fans that connection and that leeway to create their own backstory. There’s something very interesting about the song, yet very beautiful. Marina’s song allows those moments of imagination.

At times Marina’s enunciation gets a bit garbled – the same thing happens with Grande – and it’s not necessarily a distraction, it’s that I’m not sure what the lyrics were in some stanzas. No matter – the music bed and the bassline in “Lovebugs” is airy, light. It’s a nice juxtaposition to Marina’s vocals. The beat is solid – a great toe-tapper. It’s a nice way to jam. My shoulders were moving, too. Still, with the myriad of sound surrounding me, my ears just zoomed into Marina’s magnetic vocals. I could easily hear this song with stand-alone piano keys fused with Marina’s voice or even a faster mix. It would translate well either way.

Marina, who hails from the Barcelona definitely brings to the table a fusion of different genres and vibes in “Lovebugs”. I can hear slight influences of psychedelic rock, big time pop influences and her voice is a throwback to Joan Baez meets Ellie Goulding. Marina has this flavor to her voice, a lingering of a worthy artist. Her voice is not abrasive or arresting, but it hits all the right notes in more ways than one.

Overall, “Lovebugs” is a keeper. Marina Matiss is a prime example of an incredible talent under the radar but will soon be on everyone’s Spotify playlist and beyond. Marina’s vocal delivery is interesting and it’s out of the ordinary.

Marina, your newest single Lovebugs is a light, beautiful summer tune – but it has a few dark undertones. Where do they come from and what do they mean?
It’s true, I love Lovebugs for this reason: It’s light and happy and easy – just like the summer, just like me. My fans know that I am exactly like that. But it also has a dark side I haven’t really talked about so far. Or in other words: There was a dark time in my life and somehow this darkness finds its way into my music – even into such a happy tune like Lovebugs.

What happened? Is it connected to why you started your musical career just recently?
It’s definitely connected. I always knew I wanted to sing since I was 4 but my family made sure I would concentrate on getting a real and serios profession. There was a lot of physical and mental abuse from my parents, complete dependency and simply no room for dreams in music. It’s sad and eventually I had to escape.

That’s very rough. Got it easier or harder after you fled?
Somehow both. I felt free for a moment but I also came very close to living on the street. No income, no money to pay rent, no money for food and 10 days before being evicted. Facing the abyss does something to you.

How did you get out of this?
I’d love to tell you that a fine university degree, being fluent in 7 languages and a hundred-something CVs in circulation did the trick. But it didn’t. What saved me was putting my best dress on and being spotted by a model scout on the street. After days with no food I was so thin that I stood out from the crowd – it’s ironic. I cried when I got my first paycheck.

After an experience like this: Were you not afraid to start something as unstable as a music career?
I was terrified. In fact I was so afraid that I spent the little money I made on financing yet another university degree, this time in business, just to boost my chances for whatever work opportunity. Naturally I clinged to the first job I landed and had no intention to ever let it go again.

“I respect strong people with beautiful, independent minds who are willing to take risks.”

Where are you now and what is your next project?
I’m spending my days between Madrid and Barcelona and the happy summer vibe in Lovebugs is certainly influenced by living next to the beach right now. My next project will be in Spanish, we shot the music video entirely by the sea and it has a burning piano in it. But that’s a story for another time.