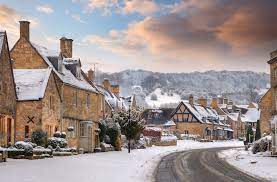 As the big day approaches, a 60% surge in Google searches on whether it will snow on Christmas* suggests that Brits are still hoping for a white Christmas even after an 11-year wait since 2010.

Curious to uncover which UK regions may be in luck this year, we analysed Met Office weather data from the past 20 years for 363 districts to determine the areas most likely to be blessed by snow on Christmas Day this year.

For the complete data of the 363 districts analysed, please click here.

With a probability of 95.87%, people in Moray, Scotland, are almost certain to see snow on Christmas day this year. Scotland is statistically the most likely part of the country to have a white Christmas, with snow also predicted to fall in Highland (91.24%) as well as Perth and Kinross (90.58%) – both being only 4.96% behind Moray on average.

Pendle District in North West England comes in fourth place. Lucky Brits living in the northern East Lancashire district can prepare themselves for a potential white Christmas, with chances of snowfall hitting 86.30%.

Also appearing in the top ten are the districts Craven (80.76%) and Stockport (79.51%), sitting at the eighth and tenth spots respectively while being merely 1.25% apart in snowfall probability.

English regions most likely to snow on Christmas Day

Unlike Scotland which has relatively high odds of potential snowfall (81.85%) in the country on Christmas Day, residents of England looking forward to a snowy spectacle on the 25th have a 43.26% chance of seeing it.

When it comes to regions, the North West has a 72.36% chance of Christmas snow falling in the area, with the North East behind with a 63.02%probability, followed by Yorkshire and Humber (60.29%).

For Londoners, the odds of snowing might not be in your favour this year alongside those in the South West, with both most likely to stand a zero percent chance for a White Christmas this year.