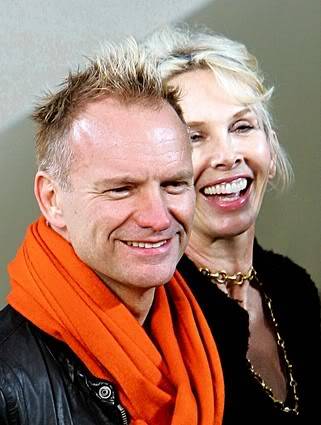 A rectangular pine and beech dining table of modern design but with some 19th century elements, formerly the property of the singer Sting and his wife Trudie Styler, actress, film producer,director and Unicef ambassador, is currently for sale at ‘no reserve’ with John Pye Auctions in Marchington, Staffs.

For fans of this famous couple who were married in 1992, this dining table would be a very interesting talking point. Its dimensions are modest, 30 inches high, 99 inches wide and 77 and a half inches deep. It is made of a beech-planked top on six turned pine legs. As the couple have many homes all over the world it is not certain which home this table comes from. As it is being sold at ‘no reserve’ someone may just find they have a bargain with a fascinating provenance.

Gordon Matthew Thomas Sumner CBE, known as Sting, is an English singer, songwriter, and actor. He was the principal songwriter, lead singer, and bassist for the new wave rock band the Police from 1977 to 1985, and launched a solo career in 1986

Currently this gilded couple both have projects that are in the public eye. Trudie has directed her first feature film, ‘Freak Show’, which is just out and Sting’s musical The Last Ship is running in Dublin. If tables could speak this one would doubtless have a tale or two to tell.

The table comes from the administration of FABB Projects Limited T/as FABB sofas.  Bidders can also browse a number of other interesting furniture items in this auction including a sofa made of cow skin and horns and a sofa in the shape of a pair of crimson lips.

Public viewing for this auction is being held in the Luxury room at John Pye’s premises at Marchington and all bidding takes place online. Public viewing: Monday 10th September 2018 11am – 2pm. Auction Ends: Friday 14th September from 1pm.