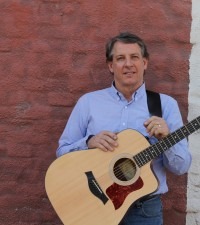 Phillip Sandifer crafts story songs with equal measures heart (“Just Because You Are”) and home (“Learning to Love You”). Each sharply written narrative owns endless energy (“The Less Traveled Road”). Further proof: “Someone Else.” The singular songwriter’s poignant new single and video showcase a songwriter in top form seamlessly framing the current CO-VID19 crisis. “Two of our daughters are in the medical field,” Sandifer says. “One is in Houston in primary care but moonlights at the busiest emergency room in the county. The other sells medical supplies to hospitals in the region that includes Austin. So, we cheer on the medical professionals and cry at their stories of exhaustion and those who have died saving others. The song and video ‘Someone Else’ is for them.”

Sandifer might not be a household name, but you know his work. The Austin resident spends his days as a writer, recording artist and sometime music producer who has recorded with top notch artists like Jennifer Warnes, Billy Crockett, Bob Bennett and Michele Wagner. Additionally, he has had a staggering 232 cuts with over 30 different artists – most notably Glen Campbell, Fernando Ortega, Cheri Keaggy, Kim Hill, Michael James, Bob Bennett, Michele Wagner and Dawn Smith Jordan. He has participated on recordings distributed by EMI, Disney, BMG and Warner Music Group, although most of his solo recordings have been released on Urgent Records (Sony/The Orchard), an independent label founded by Sandifer in 1984, and more recently on Wider Sky Music (Sony/The Orchard).

The new single highlights his current mission. “Like a lot of people in the same situation as we are in you ask, ‘How can I help? What can I do?’” he says. “My wife and I have given to the Central Texas Food Bank as they have had a donor give matching funds to where for every dollar raised created four meals. My wife is a terrific seamstress to she’s been making some killer face coverings for family, friends and whoever might need one. We are also, probably somewhat obnoxiously, tearing up social media asking people to stop posting every conspiracy theory known to man and to instead consider working with the government or other organizations to help in any way we can. We’ve been taking my 89-year-old mother in law groceries every week. She, of course, just wants to get out and take a spin – she still drives – but is currently complying with our ‘stay put’ encouragement.”

Sandifer’s music career highlights include having Roger Nichols (Steely Dan, John Denver) mix one of his recording projects (“Keeping The Dream Alive”) and one of his best known songs (“When It’s All Been Said & Done”), recording a duet with Jennifer Warnes (“In His Love”), writing a song (“Unto The Least of These”) with one of his favorite writers Bob Bennett that was recorded by one of his favorite artists Glen Campbell, recording one of his favorite songs (“Return To Pooh Corner”) for a Disney project and being the executive producer of Fernando Ortega’s first nationally released recording (“In A Welcome Field”). The new single “Someone Else” will join these accomplishments as another career high watermark. Sandifer hopes it will draw attention to the worthy cause.

“While we are all itching to get back out there, the lives of those in the medical field are really on hold,” he says. “They are focused on us and getting us through this thing in one piece. We are the someone else’s that they are consumed with daily. They have two requests of us: that we care about them and support them emotionally and that we give them the tools, that is the personal protective equipment that they need, so that they don’t go down saving us.” Please visit https://GetUsPPE.org so that people can get active and resolve this problem of lack of personal protective equipment.

Watch and Support “Someone Else” by Philip Sandifer below;

Lily Thompson on going through the storm, feeling just fine and not loosing focus