What Activates a Supermassive Black Hole? Even in the Jam-Packed Early Universe 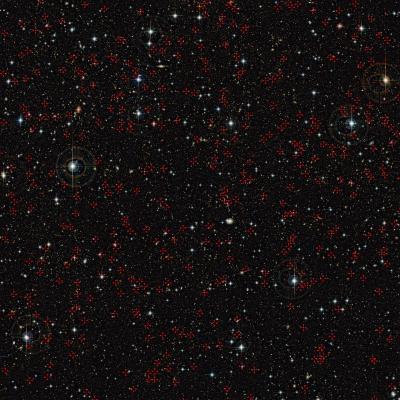 A new study combining data from the European Southern Observatory’s Very Large Telescope and the European Space Agency’s XMM-Newton X-ray space observatory has turned up a surprise. Most of the huge black holes in the centres of galaxies in the past 11 billion years were not turned on by mergers between galaxies, as had been previously thought.

At the heart of most, if not all, large galaxies lurks a supermassive black hole with a mass millions, or sometimes billions, times greater than that of the Sun. In many galaxies, including our own Milky Way, the central black hole is quiet. But in some galaxies, particularly early on in the history of the Universe [1], the central monster feasts on material that gives off intense radiation as it falls into the black hole.

One unsolved mystery is where the material comes from to activate a sleeping black hole and trigger violent outbursts at a galaxy’s centre, so that it then becomes an active galactic nucleus. Up to now, many astronomers thought that most of these active nuclei were turned on when two galaxies merge or when they pass close to each other and the disrupted material becomes fuel for the central black hole. However, new results indicate that this idea may be wrong for many active galaxies.

Viola Allevato (Max-Planck-Institut fur Plasmaphysik; Excellence Cluster Universe, Garching, Germany) and an international team of scientists from the COSMOS collaboration [2] have now looked in detail at more than 600 of these active galaxies in an extensively studied patch of the sky called the COSMOS field [3]. As expected, the astronomers found that extremely brilliant active nuclei were rare, while the bulk of the active galaxies in the past 11 billion years were only moderately bright. But there was a surprise; the new data showed that the majority of these more common, less bright active galaxies, even looking back far into the past, were not triggered by mergers between galaxies [4]. The results will appear in The Astrophysical Journal.

The presence of active galactic nuclei is revealed by the X-rays emitted from around the black hole, which were picked up by ESA’s XMM-Newton space observatory. These galaxies were subsequently observed using ESO’s Very Large Telescope, which was able to measure the distances to the galaxies [5]. When combined, the observations allowed the team to make a three-dimensional map showing where the active galaxies lie.

“It took more than five years, but we were able to provide one of the largest and most complete inventories of active galaxies in the X-ray sky,” said Marcella Brusa, one of the authors of the study.

The astronomers could use this new map to find out how the active galaxies were distributed and compare this with predictions from theory. They could also see how the distribution changed as the Universe aged — all the way from about 11 billion years ago to almost the present day.

“These new results give us a new insight into how supermassive black holes start their meals,” said Viola Allevato, who is lead author on the new paper. “They indicate that black holes are usually fed by processes within the galaxy itself, such as disc instabilities and starbursts, as opposed to galaxy collisions.”

Alexis Finoguenov, who supervised the work, concludes: “Even in the distant past, up to almost 11 billion years ago, galaxy collisions can only account for a small percentage of the moderately bright active galaxies. At that time galaxies were closer together so mergers were expected to be more frequent than in the more recent past, so the new results are all the more surprising.”