Geneva calls for the immediate release of Julian Assange 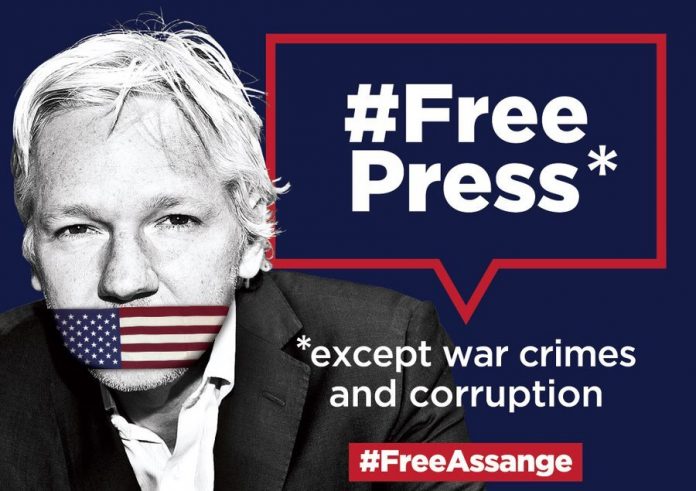 Post Views:
8,042
Calls to free Wikileaks activitist, Julian Assange. There will be a Press conference on June 4 at 2 pm.
Registration
Media are requested to register on www.pressclub.ch

In the name of the humanitarian values rooted in Geneva, City of Peace and Human Rights, a dozen personalities, including the UN Special Rapporteur on Torture Nils Melzer and the Mayor of Geneva, are mobilizing on June 4 to launch the “Geneva Call to Free Assange” #GVA_FreeAssange. The “AnythingToSay” statue dedicated to whistleblowers Edward Snowden and Chelsea Manning as well as to Julian Assange will be installed at the same time on the Pâquis pier in front of the Geneva Jet d’eau.

WikiLeaks founder Julian Assange, currently held in solitary confinement at the Belmarsh maximum security prison in London, is the subject of an extradition request from the United States, where he faces up to 175 years in prison for violations of the Espionage Act. An initial refusal to extradite him, issued on January 4 by the British judiciary, was based solely on the risk of suicide for the defendant in the American prison system and is currently being appealed by the United States.

Julian Assange’s state of health has seriously deteriorated. According to Nils Melzer, the conditions of imprisonment of the WikiLeaks editor-in-chief amount to “psychological torture, cruel, inhuman or degrading treatment. Julian Assange has committed no other crime than telling the truth”. The charges against the 49-year-old Australian are a serious attack on the freedom of the press. Any conviction would confirm an act of censorship and a precedent with alarming consequences for all media and for the proper functioning of democracy.The Geneva Call, which includes six demands, will be made public and open for signature on June 4 at www.pressclub.ch.

Public inauguration of the AnythingToSay?
Installed on the Pâquis pier, in front of the Geneva Jet d’eau, the sculpture by Davide Dormino anythingToSay? representing whistleblowers Edward Snowden, Chelsea Manning and WikiLeaks founder Julian Assange will be officially inaugurated on Saturday, June 5, the day after the launch of the Geneva Call. Eminent personalities will take part to the inauguration. Many eminent guests will take part in the inauguration.

The Association of users of the Bains des Pâquis, initiator and organizer of the event, will also present an exhibition on whistleblowers and will host a debate at 6pm. Throughout the day, the public will be able to show their solidarity and everyone will be able to take turns to stand on the statue in the place assigned to the citizen. (The sanitary measures in force will be strictly applied)

Context of the Geneva mobilization for Assange
On January 4, the British justice system refused to proceed with the extradition of Julian Assange to the United States, where he is the target of 18 indictments, 17 of which are for violations of the Espionage Act, which dates back more than 100 years. The 700,000 or so classified documents made public by Julian Assange, often in collaboration with the media, have revealed the massacre in 2007 of a dozen civilians, including two journalists, by the US army. The video of this attack carried out by helicopter was broadcast in 2010 with worldwide repercussions.

Geneva is the seat of the Human Rights Council and of countless international and nongovernmental organizations (NGOs) for the defense of human rights, freedom of expression and freedom of the press. This commitment gives it special responsibility for promoting these values in Switzerland and around the world.